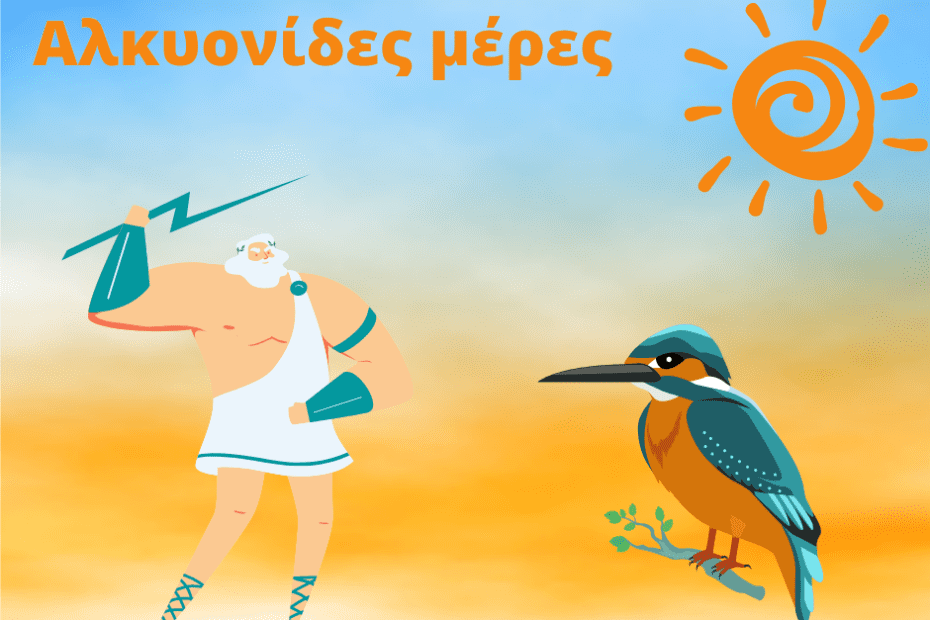 It is winter already and the weather is getting colder and colder, even in Greece! There are, however, these days during the winter season when the weather is warmer and sunny. Meteorologists might explain this phenomenon in their own words; but Ancient Greek mythology has another interpretation!

Alcyone and Ceyx, or «Αλκυόνη» (alkióni) and «Κήυκας» (kíikas), was a couple happily living together. It is said, according to one myth, that their happiness crossed the line of arrogance by comparing themselves to Zeus and Hera, a fact that made the gods furious. That’s why Zeus threw a lightning on Ceyx’s boat resulting in the loss of his life. When Alcyone learnt the news, she was devasted and jumped into the sea in an effort to terminate her own life as well. The gods showed compassion and decided to transform her into the so-called bird “kingfisher”, known in Greek as «αλκυόνη» (alkióni)! And because kingfishers in Greece lay their eggs in winter, namely in January, Zeus allowed the sun to shine brightly and warm the kingfishers until their eggs hatched!

For this reason, these warm days are called halcyon days, «αλκυονίδες μέρες» (alkioníthes méres). They last around 2 weeks sometime between the 15th of December and the 15th of February. Now you know how to explain  this weather phenomenon to your friends!